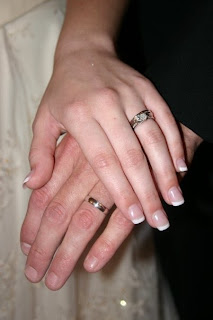 Maybe it’s because it’s drawing nearer to mine and hubby’s anniversary {ok, so it’s not until April, but still}. Maybe it’s because I’m blissfully happy in my marriage right now and I want to stay that way. Maybe it’s just because I’m a woman and I’m allowed to think about marriage. No matter, the sanctity of the wedding vows and the light-heartedness that goes into it these days frustrates me.

I think back to when I was a little girl and used to watch the fairy tale princess movies…there was a picture perfect ideal set for what I wanted my future to be like. I would marry a man that would sweep me off of my feet and we would live happily ever after. Never did I ever about the fact that maybe my marriage wouldn’t last. That’s not what little girls think about.

And as a grown and married woman now, that’s not the kind of thing that I think about. About my marriage ever ending. About the vows that I took on April 19, 2008 not really meaning anything. That they would hold up through all of the good times, but as soon as things got rocky that I would head for the door and throw in the towel. Hubby and I had a good long talk about divorce before we said the “I do’s.” We decided then and there that we would work through the hard times and that we wouldn’t give up on our marriage. And I think that’s the glue that holds us together.

Marriage is hard. I’ve said that time and time again. God’s standards for marriage and the ones that society sets forth are completely diferent. Society says that it’s okay to leave your spouse whenever you feel like it. If you get bored with what you’ve got, then it’s okay to trade them in for someone else just because you can. Take Tiger Woods for example. Or Brad Pitt. Or Jon Gosselin. All married men, two of them had kids, and they just up and left. Just because they found a new woman {or several women…} that they thought would bring them something better. And it’s not just celebritties. It’s every day people too. Family, friends, neighbors…every time you turn around.
When Hubby & I first got married, my scared insecure little girl side used to freak out and worry that I was going to be one of those women. Not because of anything that my husband did, but just because it seemed like the norm. You stay married for a while, something better comes along, and then you divorce. But I tell ya’, God’s plan is totally and completely different. It took a while {and by a while I mean over a year} to allow God to heal me of that fear. To heal me of the worry and the pain that was my past and let go of the lies that I had believed for so long. It took a lot of reasurance from my wonderful husband to convince me that the garbage that was in my head was just that-in my head.
Hubby and I have learned to let go of things that hurt us and cause one another pain. We’ve learned to see past the social stigma that there is on marriage and together we have decided to have a marriage like God intended. We encourage one another, we pray for one another, we share responsibilities and help each other out. God is teaching me how to be the kind of wife that my husband deserves and he’s showing us together how to have the kind of marriage that glorifies him. We aren’t perfect. We still get frustrated with one another…sometimes more than once a day. But never, have I ever even thought about finding someone else. Nor do I want anyone else. I don’t understand these husbands and wives that tear their marriages and their families apart for the sake of their own selifishness.
Sorry. Guess I got up on my soap-box this morning, but this was just on my heart. And I know there are a lot of women who read my blog that feel the same way about their husbands. Women who love their husbands more today than they did the day that they got married. Women who pray for their husbands and who strive every single day to be the kind of wives that God calls them to be. Women who fight and will always fight to have the kind of marriage they deserve and that God wants. “Love’s not a fight, but it’s something worth fighting for.” You’ll have to excuse me now…I’m going to text my husband and tell him how much I love him. Then I’m going to lay out something to fix him for supper.
Happy Monday!