I’m having a “Girl’s Day” with my baby sister on Sunday. We’re having lunch. I’m going to get my hair done. Then heading to the movies. Probably for coffee…I’m really excited. I haven’t had a serious girls day in a long, long time. And we are due for a sister day. Especially considering that our move is looming. In exactly two months we’ll be on our way to Alaska…saying goodbye to Alabama for a while. And I really mean a while. At least a year, most likely two. But I don’t want to talk about that just yet.

I’ve decided to take a deep breath and go for something totally new when I get my hair done Sunday. I’m actually going to brave a body wave. I attempted one back years and years and years ago. I think I was in 7th grade the last time I tried it and the lady that did it totally misunderstood me and gave me a perm instead. I looked I had a really bad 70’s type hairdo going on…something similar to this: 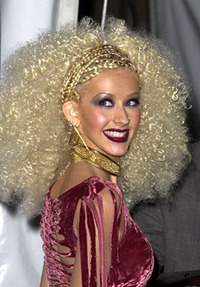 Oh yeah. And it was really that scary. Horrible. ::shudder:: Needless to say that this go around I’ve found a fabulous girl that does my hair and she’s making big promises to do it like I want it. And that she won’t mess it up. Gulp. We shall see. I’m wanting something new for my trip to Cali and I always like my hair curled when I actually take the time to fix it. I figured it would be easier to pay someone to get it to stay that way for a while.

I am giddy with excitement at the fact that I get to see my husband in 33 Days. Hope you don’t mind hearing me say things along those lines, because for the next few weeks, almost every post will probably mention that fact. Oh well. After eight months of separation, I guess I’m entitled. I seriously don’t know how some military wives do 12 and 18 month deployments year after year. You ladies, YOU are the heroes.

I guess, though, that you just learn to adapt. I know that I have. I hate having my husband gone, but it’s one of those things that just becomes sort of routine. You get accustomed to them not being there; you learn how to single parent; you readapt and you just do it. Because you have to. And because it’s your job. Eight months has been a long time, but honestly, at this point, my mentality is “what’s a few more?”

NOT saying that I’m not ready for my husband to come home or anything like that. Because I would have loved to have had him back home yesterday…or 8 months ago. Haha. But truthfully, my concept is that I’ve been without him this long, so another few months or weeks wouldn’t really make that much of a difference. I’m just overjoyed that he’ll be home for Christmas and New Years. Beyond thrilled. And now I’m reaching that point in our time line where I can start getting excited about the countdown. Start planning my outfits and what I’m going to wear when I see him again…all that girly stuff.

I’m getting a mani/pedi, eyebrow wax, and a new outfit for my arrival. I love any excuse to shop. Unfortunately though, what I buy is pretty much limited by the fact that I have buy things that I can wear in Alaska. And cute little dresses won’t really be of much use there.

Did I mention that we’ll probably be heading straight down to Florida the Sunday after we get back from California? I *think* they are coming to load our storage the 20th of December. Which means that we are even more limited on what we can get Little Man for Christmas. I’m a tiny bit bummed about that. Not that we were planning to buy him anything really, really big right now because we are moving. But that just limits our selection even more. We are planning to get him a tricycle when we move. And a puppy is high up on my his priority list, as well. So a stocking full of cars, a portable DVD player and amble airline entertainment items are on the shopping list this year. So anyone with any cute ideas for things we could get him, please feel free to send those my way.