Josh’s mom and little brother came down for the weekend to help out with Noah while Josh has surgery, so today we all went to the Ray’s FanFest at the Trop. Noah is really too little to have any clue what is going on, but we thought it would be kind of cool and a neat experience to take him to the park. We were a little disappointed to find out that all of the baseball players that were giving autographs were only minor league players…no one that was worth standing in line 4 hours for anyway. Not that it really mattered…Noah slept through most of it. Chase really enjoyed it so that was good. 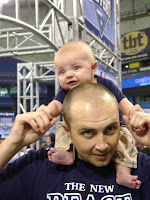 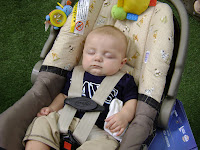 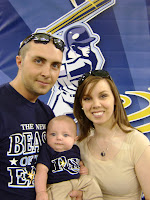 For Valentines Day, Josh surprised me with White and Red roses and all my favorite candies scattered across the coffee table in our living room. Inside the vase of my flowers, he had hooked a beautiful Aquamarine Antinque Style ring that I had been eyeing for months. He got me a really sweet card & wrote me a letter. Noah got me a cute little teddy bear that says “You’re a Keeper” and a card that Josh even helped him sign. It was so sweet. Josh got a new wedding ring for Valentines Day. One that doesn’t scratch, so he can’t mess it up at work. We also got our income tax money, so we went and bought a few small things we both wanted. I’m typing this right now on my brand new mini-laptop (which I have named Pearl…lol). We also decided to fore-go our date until Sunday night, just because we new there would be a million people out and about Saturday night. So, Sunday we went to the movies to see the “Friday the 13th” remake (which was really good by the way…) and then went to Chili’s to eat a late supper. It was fun, and really nice to be able to get out…just the 2 of us for a couple of hours. Something we don’t get to do very often anymore since the baby is here and we don’t really know anyone that can babysit for us. 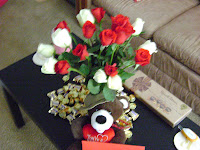 Josh had his surgery yesterday. It went really well. Thanks to everyone who has been praying for us. They ended up not starting on time because the doctor was later. They had him scheduled originally for 11:00 then called and changed it to 7:30…then he didn’t come to work on time and they didn’t even start till 8:45. Oh well…we were still home by lunch and he is doing really good. Just sore and enjoying his break from work.