Hello my bloggy friends! Sorry I have been away for a couple of days. It has been a rough day and a half.

Yesterday was that day. You know which one I mean. That day where absolutely everything that can go wrong, does. That literal “Murphy’s Law” Day. It all started Thursday night when my power cord for my laptop just died. I was getting ready to go to bed, when I usually catch up on my blog reading, and it just went ca-put. So, we managed to look up the phone number to the company in Texas before the computer completely died. We got a 6 month warranty on our computer when we bought it, but at the time, we weren’t wanting to spend anymore money than we already did, so we decided to fore-go the extended warranty. Go figure. Fortunately our warranty hasn’t lapsed yet, so our cord is covered. After spending 45 minutes on the phone with some guy that didn’t even hardly speak English, much less understand it, Josh finally got to the point with the guy on HOW we actually get our new cord.

We are were supposed to send them our broken cord and they were going to put us a new one in the mail. To keep us from having to wait, they wanted Josh’s credit card number just in case they never got it they could charge us. (Why anyone would want a broken power cord, I don’t know.) Anywho. After giving the guy 3 different credit card numbers, each one coming back that the card “was stolen or lost; had an invalid experation date; and the names didn’t match” we were told that we just had to send our broken cord and then when they received it, they would send us a new one. Meaning- it was going to be atleast 2 weeks before I ever got a new cord. Not Good.

So, I went to bed frustrated because I didn’t have my computer. I was trying to be positive, though, thinking that maybe I would get some extra cleaning done and maybe some reading. I woke up yesterday morning to the sound of Noah pitching a fit at 6:30 (about an hour and half earlier than he usually gets up.). He was ill all morning & didn’t want to nap at all. About 11:30 he finally went back to sleep, so I started attempting to clean the house. I got the kitchen and downstairs bathroom clean until catastrophe hit.

Josh thought he got off early yesterday, so he came walking in about 12:30-12:45. He got out the stuff to fix himself lunch and walked outside to check the mail. Low and behold the power company pulls up. The guy gets out of his truck, walks around the yard, checks out a few different houses, and of course comes over to ours. He. turns. our. electricity. off. Josh is standing outside trying to figure out what’s going on and all the guy will tell him is that he has a work-order to shut us off. So, I’m inside freaking out because they are cutting our power off and no one knows why, it’s 100 degrees outside, and of course, during all of this, Noah decides to wake up from his nap.

I get on the phone with the power company and some extremely rude woman gets on the other end. I pull out my bill, double check the due date (which is August 19) and start trying to get to the bottom of this whole debacle. She was rude. I mean, extremely, if I would have been talking to her face to face, I would have probably been uglier to her than I should have been. After spending an HOUR on the phone with these people, being transfered more than one time, we discovered that they were supposed to turn off the power at 60th STREET North. We live on 60th AVENUE. You would think that having turned the power off at the wrong house, it wouldn’t take them put a few minutes to come turn it back on, right? WRONG! [Oh yea, side note: in the middle of Noah screaming because he was hungry & me arguing with the power company that they turned off the wrong power, Josh got called back to work just to get in trouble because someone told them all they could leave and they weren’t supposed to. Meaning-he had to get up and go to work this morning.]

The power went off at 1:00. We didn’t have electricity again last night until 7:30!! It was hot. Noah was ill because it was too stuffy in the house for him to nap comfortably. I was ill. I had stuff laid out to fix a hamburger and potatoe casserole for supper. My computer was dead. I had half of the house cleaned up. Ugh. Just a bad day all together. We decided to venture to Wal-Mart yesterday afternoon to look for a power cord for the computer and the cheapest one they had was $100.00. Same thing at Staples. And we in no way can afford a $100 computer cord right now. We ended up at the neighbors house until the power came back on because it was too hot to sit at our house. We did find out that her laptop cord works on our computer so she is letting us borrow it this weekend. We ended up eating McDonalds for supper because I didn’t have stove to cook on.

After 6 1/2 hours, I finally got my power turned back on. Just in time to put Noah to bed. Long day. Exhausting day. I had intentions of blogging this last night just so I could vent, but instead I took a loooong hot shower and collapsed in bed. Then I had weird dreams…lol. But Noah is in a pretty good mood this morning. Just waiting on Josh to get off of work. No plans for today. After yesterday, I don’t know that we are going to do anything today. It looks like it may rain, so we will see. After all the crap that went on yesterday, I walked outside last night to tell the neighbors goodnight, and I looked up and saw this: 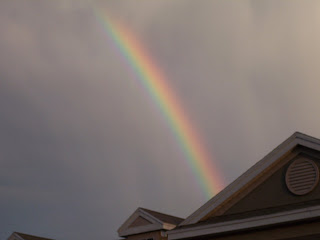 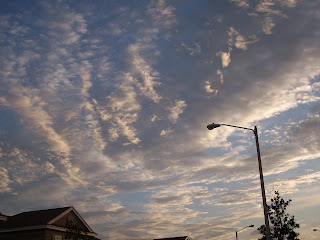 I think they were God’s way of telling me that today was going to be a better day. The same way that the rainbow meant hope when Noah’s Ark landed on the mountain of Arrat, I think that simple little rainbow was God’s promise to me that things were going to get better.