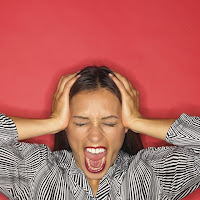 If I hear one more scream or squeal, I am going to rip my hair out!

If I have to wash one more dish, do one more load of laundry, pick up one more pair of dirty underwear…I’m going to lose my mind.

If I have to wipe one more puddle of spilt juice off of the kitchen floor or wipe one more counter or change one more diaper, I am pretty sure I am going to go crazy.

Have you ever had one of those days? Since returning home from Alabama with a son who now knows how to walk, throw food, squeal and throw temper-tantrums [oh yes, and with real tears for that matter…] I have had several of those days. Being a stay-at-home mom and full-time Housewife is a very repetitive full time job. I mean, very repetitive. As I’ve said in previous posts, my schedule looks somewhat the same every. single. day. I find myself becoming frustrated and ill with the job at hand and not doing everything that I know that I need to do. In this, I know that I am not alone. I read a lot of different blogs and have found that this is a very common feeling amongst the mom/wife blogger population. Even so, common feelings or not, God has really started to convict me about the attitude I take about my role in life right now.
This slap in the head came the other day while I was listening to my son scream in the floor because I wasn’t sitting there playing with him when there was a sink full of dishes that needed washing. “Dear Lord,” I thought to myself, “would you pleeeaaase just let him shut-up and go to sleep for a little while so that I can get this stuff done?!” I was starting to get irritated with Noah and I could tell that my frustrations were becoming evident to him. {Believe it or not, chidren can sense that kind of thing…yea. Creepy, I know. } I tried all of the usual tricks that pacify my son…rocking him, check the diaper, try to give him a snack, crawling around on the floor with him, giving him the cup of ink pens that sit on the end table beside the couch for him to play with. Nothing was working and my blood pressure was rising. I even resorted to picking him up and dancing around my living room with him like a complete idiot. Nada.
At this point, my stress level was sky high and I just broke down and started crying. I can’t take it when he gets to the point of being totally inconsolable. It makes me feel like a crappy mom when I can’t get my son to stop screaming, and it scares me because it makes me wonder if there is something really wrong with him. Sooo…I plopped back down in the rocking chair, with a bottle of apple juice and Noah’s ‘night-night blankie’ and started rocking. Again. This time I turned the TV off and started humming. “Revelation Song” is one of my favorite new contemporary Christian worship songs and I had listened to it earlier and it was stuck in my head. Finally, after going through the song 3 times, Noah had fallen asleep. After I took him upstairs to his bed and got him layed down and situated, I came back downstairs and sat enjoying the silence.
Normally, I don’t get much quiet time during the day to listen to God speak to me. But, out of exhaustion due to my previous debacle with little man, I wanted silence. No noise. It was then that God replayed what had just happened and my initial reaction to it. Followed by a replay of how I have acted about other things. The laundry, the cleaning, the cooking, picking up and tidying things up around my house. He really started pounding me about my attitude. {notice, God’s ‘voice’ is in red}
Do you really think that’s the right way to act?
No, but God I’m so tired of it! I do the same thing all day every day and I feel like I deserve a break every once in a while.
Do you really think that’s the right way to act?
But it’s not fair! I don’ t ever get to relax and do what I want to do! [at this point, I am whining like a 5 year old]
How often do I hear the same things and do the same things over and over again?
I started thinking about that. What would we do if one day God just decided that he was tired of it, too? What if he decided that he was tired of hearing us complain over and over and over again? What if he decided he was tired of being generous and gracious and just gave up on us? What then?
That’s when I realized what I was doing wrong. God hears us whine and complain and fuss about our lives and what we have, when we should really be praising him and thanking him for all that we do have. Instead of me complaining about doing the laundry or having to change diapers all day, I should be thanking God that I not only have a washer & dryer that works [something I didn’t have in our last house] but that I have the opportunity to be a stay at home mom and wife where so many other women are forced to go to work to make ends meat. I don’t have to work. I get to stay at home all day with my son and take care of my husband.
It’s a hard lesson to remember. It really is. It’s so easy to bogged down in the every day routines and to forget all that there is to be gracious for. If God hasn’t given up on us and continues to give to us as graciously as he does, then I need to learn to stop complaining and give to my family as graciously as I can. It’s amazing the lessons we can learn in silence.

Shelves of my Heart »