Lessons from a Vegetable 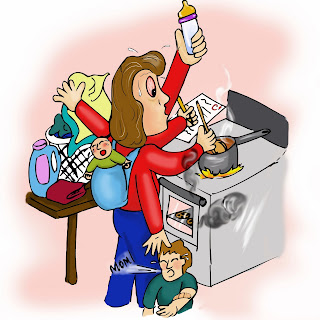 You’ve never felt this way have you? Like you have 10 million things going on at one time? Like you are being pulled in 100 different directions? Like you just can’t seem to get a grip on things no matter how hard you try? Yeah. Me either. Not.

If I’ve learned anything in the past almost two years, it’s this: People don’t tell you the entire truth about marriage and motherhood.

Prior to child-birth [especially during those “we are trying” months/weeks] it’s all, “Oh being a parent is the most rewarding thing in the world. There is nothing else like it. You won’t ever get tired of being with your baby…” Again, all of that is true, but aren’t these people leaving something out? Aren’t they forgetting to tell you a few things about these wonderful, happy, greatest moment of your life milestones? Ummm…yes. I would say so.

No one tells you before you get married that on the days your husband ticks you off beyond belief that you have to spend the rest of the night in the same house with him trying not to wring his neck. No one tells you that arguements…big ones…are going  to happen and you just have to deal with it. No one bothers to mention that the ‘honey moon’ period really does end, no matter how ‘hot and heavy’ you are for one another when you are dating.

No one bothers to mention the fact that babies don’t sleep the first several months of life. And that when they don’t sleep, you don’t sleep. Or that when you’re a mom, your life circles and revolves around your new baby for a long time. Or that, contrary to popular belief among people who don’t have kids, you really won’t always want to ‘do it’ with your husband after you’ve been up all night and day with a crying newborn. Nor do they tell you that said husband won’t always want to ‘do it’ with you either when he comes home tired from work and then has to encounter a frustrated exhausted wife and mother and a still crying baby.

Life changes when you get married. And it especially changes when you have a baby. It’s overwhelming. It can honestly drive you nuts if you don’t have a place to filter all of your worries and concerns. Lucky for me, I discovered blogging prior to having little man so I haven’t had to undergo expensive therapy sessions to cure my moderate insanity {yet}. But it can be frustrating. And exhausting. And completely and totally nerve wracking.

I woke up this morning after spending most of the day Monday & Tuesday attempting to put my house back in order after the holiday madness, to find my house a disaster. Again. Earlier this week I took down the Christmas lights and decorations [though the actual tree is still standing naked in the corner of my living room], cleaned the kitchen like a mad woman, scrubbed the bathroom where everyone was in and out while they were here, and put away all of the toys, clothes, and junk items that were just lying around. And I wake up this morning to a house that looks as if it hadn’t been cleaned in over a month. The dishes were piled up in the sink, little mans toys were all over the place, papers were piled up on the bar…it was awful. And I temporarily lost it.

You know how us moms can go into this sort of panic mode? Where you are running around like a crazy person just let out of the nut house trying to deal with everything all at one time. I snapped at my son, who isn’t even old enough to be snapped at yet. I rammed by little toe into the door frame while I was trying to carry dishes to the sink, allowing a few not so nice four letter words to slip out of my mouth. And I knocked over a cup of Gatorade…all over the kitchen floor. Which required immediate clean up so it didn’t get sticky-which didn’t prove easy to do when I was having to use one hand to hold my beloved little mess maker away from the puddling pile of juice he wanted so badly to splash in.

Finally, I threw my hands up and sat down. I got ill and just said to myself that I wasn’t going to do anything. The mess could just sit there and someone else could clean it. [Not that that would EVER happen because there is no way I could just let it sit…that’s not in my blood. It drives me nuts.] Low and behold it was during this fiasco that the good Lord decided it was the perfect time to speak to me.

It utterly amazes me the ways God can talk to us if we just take the time to slow down and listen. God is really quite creative, I have to give him that. Because this morning, the big spoke to me through a vegetable. 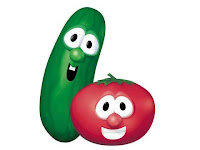 Yep. These guys. Bob and Larry. Rather than sending messages to children all across the world this morning, they were talking to me. A 20-something mom who felt at the end of her rope this morning. The message wasn’t anything complex {I mean, really. We are talking about a childrens TV show with talking vegetables. How complex could it be?} It wasn’t like they were teaching on Leviticus or anything. Little man was watching “Gideon: Tuba Warrior” and I was only halfway paying attention to it. But the part that I did hear was this:

“God, you could have chosen anyone else for this job. But you didn’t. You chose me. Thank you.”
What a great prayer and an eye opener. There was Gideon, about to go to war against an army that was so much bigger than his. He was afraid…probably terrified of the outcome.  But in this time of uncertainty and weariness, he took the time to remember that God had specifically chosen him for the job at hand. How awesome is that? To know that, no matter how overwhelming and frustrating life gets, that our Lord has chosen us for the very task at hand.
God picked me out of all of the other women on this Earth to be partnered with my husband. To battle life with, the enjoy things with, to love and cherish. Me. He chose me out of all of the other moms out there to bless with this little boy. No one else. He didn’t give anyone else on this Earth and Josh or a Noah like mine. He gave them to me, and me to them. What a humbling realization. That no matter what happens in my life-whether it be in our marriage or within our realm of parenthood, I was chosen for this job. I was hand selected by the Lord himself to be here, right now, with this man and little boy.
I know things happen and that life gets in the way, but right now as I write this, I am making myself a promise: to not let the little things keep me from remembering that this is my calling. This is where God wants me right now. He wants me heree, in Florida, in this house, cleaning up this mess or that mess. He wants me here cooking my husband and son a good meal. He wants me here keeping the laundry washed and the house tidy for my husband who works to keep a roof over our heads and food on our table. He wants me here, blogging about what he’s teaching me with each of you in hopes that I may offer encouragement. This is what I am here for. God could have chosen anyone else to do this job. But he didn’t. He chose me. And for that I am thankful.