It’s a Love Story…Part One

This was recently my Guest Post over at From Here to Eternity. A lot of my readers ventured over to read it there, but there were even more that didn’t. So, because I love you guys so much and because I love to share my story, here ya’ go! Part Two will be up for you to read on Thursday, so be sure to check back and catch the end of our story!

Every little girl dreams of being a part of a love story. Of being whisked away by a handsome prince on a white horse. We read Cinderella, Snow White, and Beauty & the Beast with a glimmer in our eyes and lightness in our hearts that such love and beauty will eventually makes its way into our lives. We set false hopes. We set unrealistic goals. And time after time we are disappointed in the outcome of our relationships.

Ours is a true story about a boy and a girl who made the choice to spend their lives together. It’s a tale of love at first sight, of separation, of heartache and a story that is still being written. So as all good stories go, I’ll begin our story this way:

Once Upon A Time…

There was a girl who dreamed of being in love. Who dreamed of finding someone to care for care the way she longed to be cared for. Someone to love her, to tell her she was beautiful, someone to just simply love her irrefutably and without end. That girl…was me.

My husband and I officially met at the local hospital the summer of 2007. I took a job at the local hospital as a Patient Care Assistant [which is a downgraded version of a Nurse’s Assistant…all of the ‘glory’ of the job without the pay or the certification] in the Intensive Care Unit. I spent two week training on day shift and heard constantly about this guy named Josh. All I heard was how good he was at his job and that I needed to stick with him when I started training because he was thorough. Truthfully, I was thinking he was going to have a Big Fat ego because he was “so good.”

My final day on first shift came and I watched a guy walk into the unit. He was tall, somewhat lanky, and wearing the same awful green scrubs I was wearing. I hadn’t seen him before, but I assumed automatically that he was “the one” everyone had referred to. When it was time for the next shift to start he came rambling in, checking off our pre-shift to do list, and propped up on the counter to introduce himself. I won’t lie. He had the most amazing bluish gray eyes I had ever seen. I knew to begin with, just by looking at him, that there was something about him that I liked. Something more to him than most people realized.

He introduced himself and the next day I started working side by side with him, training, learning and watching as he worked. He took his job seriously and went above and beyond what was required. We didn’t talk about much other than work really, and I was secretly disappointed in that. I wanted to get to know him. I wanted to know who he was-who he really was. I had picked up bits and pieces about his past through scattered comments and conversation. He was an ex-Navy boy. He was as Southern as the day was long [this I learned from catching a glimpse of the Confederate Flag tattoo that adorned the inside of his arm]. His parents had divorced and his mom was currently married to a guy that he did not like or get along with.

At some point, and I’m not sure when, our relationship began to change. I started feeling nervous around him. It was an excited nervous, with a stomach and heart full of butterflies. I can’t pin point what it was that made me start to see him differently, but something did. I think it was the way he went about asking me for my phone number the first time. Pretending he needed it to bring me a book I needed for work…as if I didn’t know that he could just bring it with him on our next shift. Once he had my phone number, the phone calls began and the conversations turned to things that went beyond medicine and hospitals.

I lived 45 minutes away so I did a lot of driving at night. Our shift ended around midnight and he started staying on the phone with me until I made it to my house. It was during these long drives that we learned who the other was. He liked rock music-Tom Petty being his favorite; he had spent countless hours in the OR with the heart surgeons and aspired to be a doctor; he was sure of himself in many ways, but unsure of his worth and what he had to offer. These conversations started out lasting until I made it home, and then began lasting for hours and hours; sometimes until 3:00 or 4:00 in the morning. We had so much to say. We seemed to understand each other in ways that others did not.

Our first date came on November 4, 2007. {Ironically that would later become the due date of our little boy.} We went to the local fair. Jeff Bates-the country singer, for those who don’t recognize his name-was in concert that night. It was unnaturally cold. I mean 28 degrees cold. And this tiny little corner of Alabama doesn’t reach those kinds of temperatures. Naturally, both of us were unprepared. I was wearing a ¾ length shirt and a jacket. Josh had only a pullover. It was freezing. Neither of us had gloves. No hats. Nothing. We were halfway through the concert. Josh was nervous. He would swear that he wasn’t, but he was. And I loved that. I loved that I made him nervous. I loved that he was too much of a man to admit that he was nervous.

A song, and for the life of me I don’t remember what song {because it’s not on any of Jeff Bates’ cd’s} was playing when Josh wrapped his arms around me. One of the lyrics was simply something along the lines of, “tonight two people are falling in love.” It was then that Josh pulled me close and kissed my cheek. Right then I knew, really and truly knew, that I had found the man that I was going to marry. I knew right that moment that I was in love in a big way. Love like I had never felt. And I was terrified.

Josh told me he loved me a few weeks later; sitting on his bed, looking at his Navy Scrapbooks. He told me that he had never felt the way he did about me with anyone. I met his whole family at Thanksgiving, he met mine that Christmas, and he gave me a Promise Ring on Christmas Eve surrounded by his family. 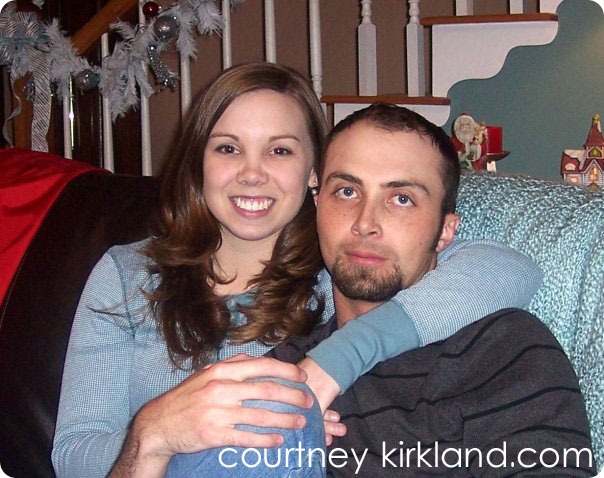 We decided that same December that we wanted to spend our lives together. I had a promise ring, and didn’t expect anything more. We just knew we were in love and that we wanted to get married. But, being the sometimes romantic that he is, and knowing how much a genuine proposal meant to me, Josh took me to the beach on February 23, 2008 and officially asked me to be his wife. We got married on April 19, 2008. 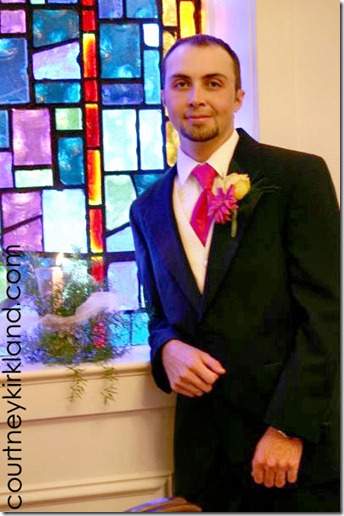 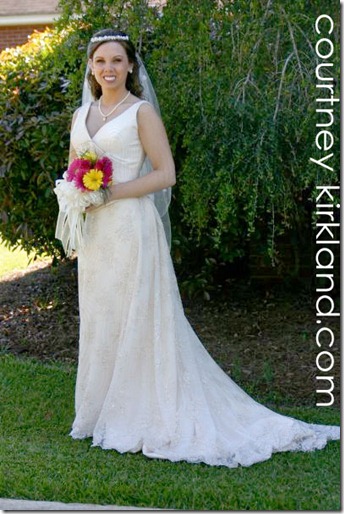 Our wedding was simple and elegant. We said our vows in front of about 150 close friends and family in the church where my Grandparents went. “Amazing Grace” played as my baby sister set roses in the seats of where my two late grandmothers would have sat. I wore a simple and antique style gown and Josh cried when my daddy walked me down the aisle. Rather than the appropriate “Her Mother and I response” when asking who gives this woman, my daddy replied with {and I am not even joking} “Me and Her Mother does.” We played “When God Made You” by Natalie Grant and Newsong during the ceremony and we laughed at all of the wrong times because we were so happy. Because we could. 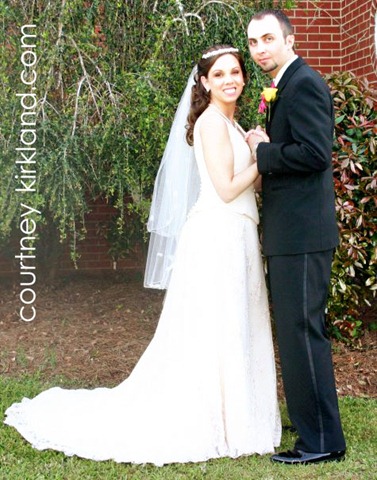 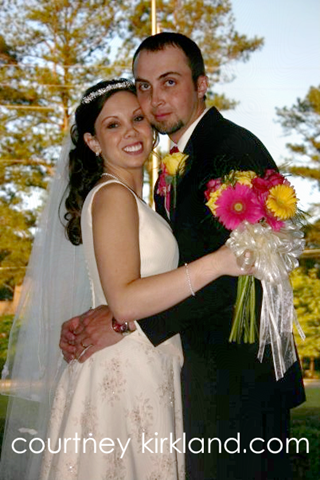 We met with friends and family afterward and spent our first night as husband and wife in Tallahassee, Florida. We honeymooned in Saint Augustine. 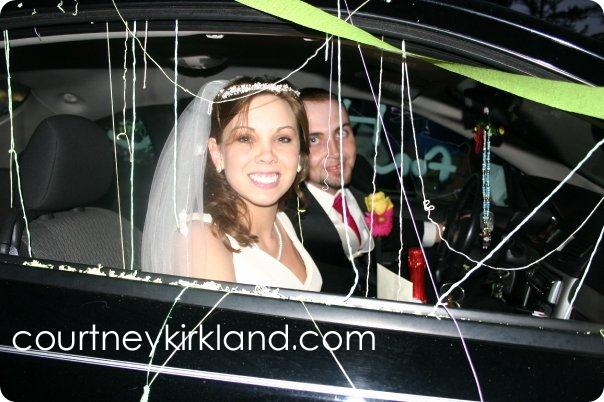 It was perfect. I was happy. I was in love. Unfortunately, people don’t tell you when you are saying your vows that the honeymoon doesn’t last, and life is not always sympathetic to the fairy tale wishes of a girl wanting a love story.

Make sure to come back Thursday to read the rest of our story!