I mentioned before that God is really starting to do a work in mine and Josh’s life…in every way that he can. Our biggest stress for the past few months has been finances. Hands down. I won’t lie, we live pay check to pay check and sometimes it gets difficult. But, God always provides for us. Today, we all went to the Family Christian and for some reason, God really drilled into Josh something that had unspokenly [is that a word?] been on our minds.

We got back to the car and Josh started telling me that he had been feeling God tell him that a lot of the movies and TV Shows we watch and music that we lately really haven’t been listen to isn’t the kind of stuff that Noah needs to hear. I agree. Not that we listen to anything really bad. Even though, Josh does love some rock music! But the movies we watch [We like slasher movies: Halloween, Friday the 13th, Texas Chainsaw…all that completely evil stuff that is really disgusting] are no where near the kind of things that God would want us to watch. So. This is what we did when we went home. 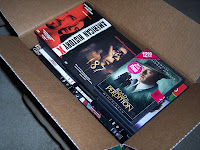 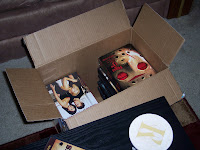 We said farewell to 87 movies. Some of which were our favorites. Josh got rid of several of his favorite movies [The Boondock Saints, Silver Bullet, The Entire Hannibal Lector Collection, Full Metal Jacket, and the super-delux Friday the 13th Boxed Collectors Set I bought him] and so did I [My Sex & The City DVD’s, Cruel Intentions, Halloween, and Tremors lol]. So, we loaded them all up, took them to the Movie Store and sold them. We got $80. Not much is it? Nope. Not at all. Especially considering that there were several brand new, only been watched once movies in there. Movies that we payed $15 and $20 for. That was God too. Showing us where some of our money goes that we could definately use on something that we NEED rather than junk that is pointless. Movies aren’t bad, but some of the ones we watched were. Not healthy for us. Not good at helping us stay on God’s path for our lives. Definately not the kinds of movies that we want our son to watch.

I used to think that parents who didn’t let their kids watch movies and stuff like that were too strict. That kids who had never seen scary, “R” rated movies like me and my friends had were sheltered. Today, I understand what their parents’ intentions were. They were trying to give them the best chance that they could. They weren’t sheltering them, they were protecting them. We live in a super-cruel world, full of evil and filth. All you have to do is turn on the news. No surprise that you will find a murder or rape case splattered across the headlines. It’s our job as parents to protect our children. To keep their best interests in our minds. That’s what Josh and I are doing. We want to give Noah a fighting chance in this messed up world that we live in. I feel like keeping these kinds of things from him and away from him for as long as I can will give him the courage to stand up and say “Hey, I’ve lived without it this long. This isn’t what’s right. My parents have taught me the things that are good and Holy.” I know kids will make their own choices and eventually I will have to set him free in the world. But I’m not depriving him of anything. Nothing at all. The things that are good, and pure, and holy and exemplify the kind of Life that CHRIST wants us to live, those are the things my son will grow up seeing.

As is becoming customary here, what are YOUR thoughts on this issue? What do you let your kids watch? How do you feel about medias influence on children?

Blog of The Week »