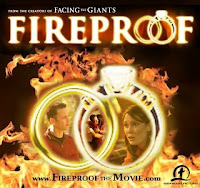 Josh and I went to see the movie “Fireproof” several weeks ago when it opened and I have been meaning to blog about it. I’ve had this blog saved in my drafts since the weekend we saw it, but have just now gotten around to finishing it. Oh well…

First of all, I was highly, HIGHLY impressed by the quality of the movie for such a small budget. The acting left something to be desired, but all together, it was really a good movie. One that I will most definately be buying when it comes out in January. I was also very impressed with the story line and the plot of the movie. I think that it is one that everyone even considering getting married needs to go and see. There were a lot of things that I picked up when I was watching it, and me-being the analytical person that I am-want to discuss a few of them.

Let me start out by saying that I am in no way a marriage expert. Josh and I will have only been married 7 months November 19, so I’m not going to pretend that I know everything about marriage…I don’t really think anyone ever does. But I did notice several things in the movie that stood out. For those of you who have seen it (and those who haven’t-sorry, I may be about to give away some of the film) you will have noticed the 2 major conflicts with Caleb and Catherine’s relationship:
1)He was addicted to internet pornography.
2) She was a flirt and put herself in very questionable and dangerous situations with men she worked with.

I believe the movie said they had been married for 7 years, and even though it didn’t show it, the issues that the movie talked about had to have started somewhere. Now, I don’t know how many men read this blog and I have no intentions to place all of the blame for the couples marital problems on the man, but from a female perspective, some of the things he was doing quite possibly triggered the breakdown of their marriage. Like I said, the movie didn’t show it, so I am just speculating for the sake of writing.

The pornography addiction I have kind of touched on in a previous blog, but to keep everyone from having to go through archived posts to read my viewpoints on that, I’ll give another run-down. When a man looks at pornography (or even just other women in general) it sends off the idea that your wife is no longer good enough for you. That she no longer possesses the beauty/appeal that once drew you to her. I think that this is a bigger problem in more households than people let on. Men are creatures of vision-they focus on what catches their eye. The Bible says that a mans wife should be the only one to do that. By spending more time focusing on naked girls all over the computer instead of on his wife and the beauty that she carried, Caleb sent the message that his wife was no longer enough for him…he needed to get his “encouragement” from elsewhere. And nothing could be more devastating to a woman than to feel that she isn’t attractive to her husband.

The second thing I saw, was that the two did not communicate with one another. He worked, She worked. They came home, and aside from sleeping in the same room, they didn’t seem to share anything. I don’t recall ever hearing them ask one another how their day went, if there was anything going on that they wanted to talk about, or even something as simple as “I love you.” They were two strangers living in the same house. That is a problem that should have been caught and delt with long before it got to that point. But, if I had to make my guess, it was something that one or both of them just assumed would fix itself. Caleb, I noticed, worked long hours and when he got home, he probably went straight to bed and didn’t feel like talking. Maybe Catherine tried to strike up conversations with him, but he consistently showed no interest in what she was trying to talk about. This “lack of communication/interest in communication” probably also triggered Catherine into looking elsewhere for the communication and affection she desired.

Yes, communication is a type of affection whether men believe it or not. I know for me, it’s a big deal for me to know what’s going on with Josh. I don’t try to beat every single detail out of him, but I think it is important to be in tune with the every day happenings that your husband/wife faces. I usually don’t have that much to talk about considering that up until Noah was born, my day consisted of straightening the house (if it needed it) and paying the bills (if they needed paying). Now that Noah is here, there is lots more to talk about because I get to recap every little move that he makes. Josh has a little more trouble communicating about work because by the time he gets home he’s tired of the Coast Guard and all it entails…so I don’t push it too hard. But it is an important part of marriage. There are a lot of things out there to break up a marriage, and I think that by talking about what goes on when you are away from one another, helps to keep you accountable for your actions. There is also the “physical” aspect of affection. This isn’t complicated…women (and men whether they admit it or not) need to be shown love as much as they do being told they are loved. What’s that saying “Love is a Verb”…if I remember my elementary school English lessons correctly a verb is a “doing word.”

All of the above I think led Catherine to seek out attention she wasn’t getting from her husband somewhere else. That didn’t make it right, but I think she thought that she had no other options. Her husband made it obvious (in her eyes) that she wasn’t attractive to him and didn’t meet the standard his internet women set (which is unrealistic for any woman that takes care of her health) and that she didn’t interest him enough to ask how her day was going or to communicate with her at all. That doesn’t mean that what she did was right. Flirting is definately a no-no in a marriage. She set herself up for a lot of ridicule and put herself in situations that were extrememly dangerous to her already faltering marriage. She was also in the wrong for questioning her husbands motives when he started the “Love Dare.” She brushed him off and never even gave him a chance to change and be a better man and a better husband.

The saving point for their marriage (aside from God’s help and intervention)? Calebs apology at the end of the movie. That was the biggest step, and even in the movie theatre I could feel my heart go out to him when he apologized for the things that he had done. The only thing I would have liked to have seen different was for her to apologize too. But, God doesn’t tell us to say we are sorry only if someone else does. He says we are to forgive, just like he has forgiven us. We are to seek out forgiveness. Caleb didn’t have to say he was sorry first…he could have been stubborn and sat around waiting for her to apologize for her wrong doing. But that wouldn’t have been right. He wanted to fix his marriage…so he did whatever it took to do that. Even I forgave him. Haha…If you need to say you are sorry for something, do it. It’s amazing that such a simple concept can cause some of the biggest problems.

Anyways, I guess that’s about it for my analytical interpretation of this not-so-complex movie…I suggest everyone goes to see it. Anyone who’s married, about to get married, or in a relationship that may turn into marriage; would really benefit from the movies message. Marriage is hard. I’ve learned that, if nothing else, in the 7 months that Josh and I have been married. It’s a whole different thing than dating-and anyone that tells you otherwise has obviously never been married. But, it’s worth it completely. Even when things around our house get stressful and I want to yank my hair out or pull Josh’s head off, there is no one else that I would rather fall asleep beside at night or wake up with in the morning. You just have to be willing to put in the effort.