This was something that had been on my agenda for a while. But, papers kept getting added and laid all over the house and I was hesitant to even begin this project. I finally got fed up. Enough was enough. The husband was looking for something he needed to take to work the other day and it wasn’t in the right place. He spent 20 minutes looking for something that we couldn’t afford for him to loose [Try replacing his Original DD214-discharge papers-from when he was in the Navy]. I had a filing system, but it was all out of whack. Too many different papers in the same place. Here are the before photos: 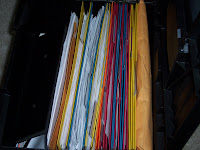 You may not really be able to tell it, but this was messy! 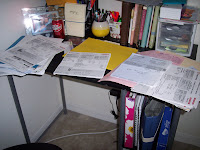 These were the papers from one of the smaller folders I went through…hence the word Smaller.
And After: 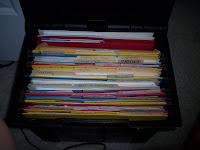 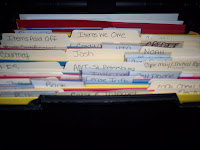 I used the filing system found here. I used the hanging folders that I already had relabeled them on the outside and added regular manilla file folders on the insides for subcategories. I pulled out all of the paper work and put it chronological order-with the oldest in the back and newest on top. I seperated out all of our medical records, with Josh’s stuff in one, mine in one, and Noahs in one. Josh’s old Navy stuff is in that big fat manilla envelope in the back. We know what that is and very rarely ever have to get anything out of it. I made a “VIP” file, which holds our marriage certificates, our birth certificates, Josh’s DD214, Our pistol permits, and all of our Tax stuff. I’m very pleased with myself. I felt so much better when that was done and very accomplished. I’m thinking of putting a deadbolt on it so that I can ensure that it doesn’t get messed up. I showed Josh “the system” and I think he understood how much work went into it. YAY me 🙂
Check out more Tackle it Tuesday here!