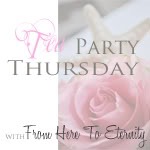 Today I’m linking up for the first time with my beautiful bloggy friend Jhen over at From Here to Eternity. I’ve intended to link up several times before and just haven’t slowed down long enough to write out a post. But today…today I’m joining in. Because at this point, I could really use some tea and crumpets {or how about Coffee and biscotti??} with some great friends.

If we were meeting today for tea, I would most likely show up with either a stain on my shirt or a cheerio in my hair. Because it’s been that way for the past two weeks. All of the moving stuff has me stressed and high-strung. I would most likely flop down in my chair, extremely un-lady like, with a big huff and a “Hey!! How are YOU this morning?”

I would probably complain about the fact that the weather was beautifully cold this past weekend…and now it’s back up to 80 degrees. That’s Alabama for you.

I’d be drinking a White Mocha and munching on that Chocolately Almond Biscotti that I am so decadently in love with. I’d tell you about the constant runs back and forth to my mother-in-laws office I’ve had this week…attempting to get paperwork faxed from here to California and from here to Anchorage. And then I’d tell you how much I hate fax machines…because they seem to hate me as well. I’d tell you that I spent a grand total of 10 hours this past week in doctors offices; and an additional 8 hours {probably…though, I may be exaggerating} filling out paperwork. I’d tell you that I was totally and completely stoked at the fact that it is only 34 days until I lay eyes (and hands…ahem) on my husband again.

I’d tell you that I’m beyond stressed out with our attempts to find a new car and figure out when and where we are going to ship it from. If we even HAVE to ship it…considering I’m looking for cars in Alaska as well. I’d tell you that they are most likely going to want to pack up our HHG’s* {house hold goods-another military term} the 20th of December. And then I’d throw in the fact that hubby and I won’t be returning from California until the 18th…at 8:00 am. Leaving us to drive to Tampa on Sunday to pack on Monday…the Monday before Christmas no less.

Then I’d tell you that despite the enormous headache that that’s going to be, I’m beyond excited to get moved.

I’d tell you that I’ve spent…oh probably about 4 out of the last 10 days online browsing for furniture, house hold décor, clothes, boots, jackets, mittens, etc. for the move. Before it’s all said and done I will be a master at online shopping. I’d mention that few of the stores around here are even selling sweaters. Much less warm sweaters. Again-that’s Alabama for you. No real reason to sell things that might keep heat close to your body. Then I’d laugh and point out the fact that growing up, I can recall more than 16 Christmases where we wore short sleeve shirts to Christmas Dinner…and at least 5 Christmases where I was in Flip-flips and capris.

I’d get off track about moving a tad bit and tell you that I’m looking forward to leaving some people and their selfish and arrogant ideas about life behind in January. People that, truthfully, I wouldn’t mind ever speaking to again. People who have judged me, judged my husband, judged our parenting abilities…for as long as I can remember. People who spend more time gossiping about everyone they meet than they do worrying with their own faults and issues. Then I’d throw in the honest to goodness truth and say that I’m going to cry like a four year old when I drive away from my parents house the day that we say goodbye…and then cry like a four year old again when we leave my mother-in-laws. I love our families. I really, really do. As much as they drive me crazy…as frustrated as I get with them…we are really blessed.

Then I’d probably get off of my soap box and laugh about addicted to blogging we are…how ridiculous our husbands think it is at times…then, knowing me, I’d brag and ooh and ahh over how in love with my husband I am. And I’d expect to hear YOU say the same about your husband-even though they drive us crazy. I’d chat about Little Man and about how we are slowly teaching him his numbers. He’s grasped numbers one through three. And understands that he is now TWO years old. And that next, he’ll  be three. I’d mention also that when he shows you he’s two, he holds his fingers in an “L” shape…his pointer and his thumb to signify two. I’d laugh about how picky he is about his cars, how he has to have at least one Lightning McQueen with him everywhere he goes, and that he takes them to bed. I’d mention that the teddy bear I bought him at Build-A-Bear on our last trip to Tampa…the one that we bought a Batman costume for and appropriately named Bat Bear…never wears his clothes. He’s not a big fan of him having a secret identity. So instead he drags him all over the house…usually with as many cars as he can hold in one hand, the bear in the other, and his bank-bank {blanket} between his teeth.

I’d give you a giant hug and tell you how much I appreciated the chat and the coffee…because during weeks like these, I need all of the friendly support I can get.