There was never a such thing as a “Build a Bear Workshop” when I was little. I had never even heard of it until a few years ago when I passed by one at the mall in Montgomery. Me being the big kid I am, have always thought it looked like fun. Now that I have my own son, I decided there would be no other option for a favorite stuffed animal than to build him his own. Again, this isn’t anything that Noah will remember, but we took pictures and he will be able look back at them and know his Mama and Daddy started taking him places and doing things with him at a young age.

The animal we picked out? Actually that we let Noah pick out-A Brown and White Jack Russell Terrier. There were only 2 dogs that you could choose from. The other was a black lab, and he seemed to grin more at the Jack Russell than at the lab. So, we figured that was the one that he wanted. They stuffed it for him, and we even managed to get him to put the heart inside of him. When it came time to choose a name, Josh reverted back to a name he heard on ‘Grey’s Anatomy’ last night…Doc. Suits us well considering Josh is going into the medical field and all. We even bought Doc a set of Scrubs. It is so cute. Noah rode around in his stroller holding onto him and gnawing on his scrub cap all morning. Truth be known though, I think Josh and I had as much fun playing in the “Build a Bear” as the other little kids that were in there. Who says you ever have to grow up? 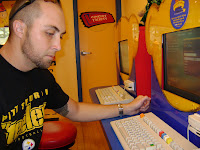 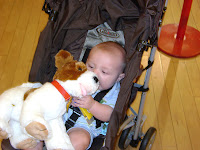 And this is Doc…all decked out and ready for surgery. Josh said he’s a Cardiothoracic Surgical Dog. LOL 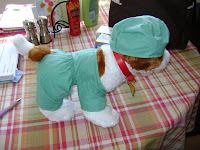 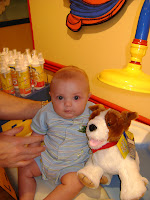