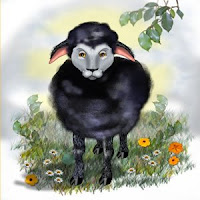 I’ll be honest with you. I have often felt like the “black sheep” in my family. And, if I were to be honest with myself, with most everyone else as well. Not in the sense that I am a criminal or that I am “bad” {as is the ‘technical’ black sheep definition}, but just in the idea that I have always felt like I was on the outside. Always the third wheel or the one that just didn’t quite fit anywhere. The one on the back-burner.

In school, I never found a place that I fit.

I remember being the only one from my group of friends in 4th grade to not be in Mrs. Mim’s class [She was the “it” teacher for the 4th grade…everyone wanted her class.] I was devastated. All of my friends were in her class and I was forced to make new friends. I remember looking on at lunch because they were all together and feeling left out. During PE & Recess they had their own ‘group’ I was no longer included in because I wasn’t in the same class.

In Junior High, I was the only one not dating and wearing makeup [and the only one still in a training bra…for those of you who would like to know that.] I remember all of my friends having dates to the 6th Grade dance. I also remember standing against the wall…alone…during every. single. slow song. Same thing at the 7th grade dance. And the 8th. I had friends. Don’t get me wrong. I wasn’t that girl by any means. I just always felt…distant. [If you ever watch Country Music Videos, I was kind of the girl Taylor Swift is portraying in her video “You Belong With Me.” Kind of a geek…not exactly popular…you get the idea.]
High School was the worst. I was best friends with the “it” girl and her “it” sister. I was the one the guys came to…when they wanted to ask one of them out. I was always the single friend. I was the one that their boyfriends called when they had a fight, in hopes that I could patch things up for them. I was also always the one that wanted the guy, but never the one the got the guy. I didn’t mesh with the popular crowd. I didn’t have the right clothes or car or hairstyle or whatever to fit in with them. I found true friendships with people like myself…people who wanted to “be” but just couldn’t.
I hated High School. HATED it. I  hear people say that they would love to go back and do it again…uh-uh. Nope. Not this girl. Never, would I ever want to go back to High School. I look back and remember some of  the loneliest times of my life.
I found my way a little in college…by taking up bad habits. I started drinking and smoking and partying with the “it” girls and found myself belonging a little bit. But then, I discovered that even though I was fitting in and making “friends” {and use that in the lightest sense of the word} I was still lonely. I was still best friends with the beautiful girls that everyone wanted to be with. I was still the one sitting at home on Friday Nights when there wasn’t a party going on and everyone else was out dating. I was still the one that my friends boyfriends were calling or texting or facebooking to fix an argument or set them up. I was just that person.
Now, as I am an adult and I’m “mature” these things don’t bother me. Okay. Kidding. That is a lie. A BIG one. And I know that now I am not alone. There seems to be lots of outsiders out there. Turns out, I married one. Hubby grew up in a family that dealt him the same kind of cards. His grandparents showed favor to his cousins and partiality to them for reasons that are way beyond my grasp. {Trust me…if you knew his 2 cousins, knew their lifestyles & habits…and knew hubby, you would wonder why on Earth they showed them partiality too.} And, as I get older, I find myself looking back and feeling that I was done that way quite often in my own family. That the partiality was shown to my sister, for one reason or another.
And it hurts.
It’s painful to feel like you don’t measure up and that you are second to someone else. Especially when it is someone that you feel you shouldn’t be ‘beneath.’ We all want to feel wanted. To feel needed. To feel desired and loved and appreciated. To feel like we aren’t walking around this Earth without a purpose or anyone to care.
And finally, tonight [well, it will be last night when you read this], after hearing a phone conversation between my hubby and his mother that relates to this very topic, I have realized something. Something that it has taken me 20-something years of tears and pain and heartache and even depression to understand: It doesn’t matter.
It doesn’t matter. At all. It doesn’t matter what anyone thinks. It doesn’t matter if I am ‘popular’ {and yes, as a grown woman, wife & mother we all still worry about that and long to belong}or whether I have an overflow of friends. It doesn’t matter if I’m “in” or not. You know why?
Because, “you created my inmost being. You knit me together in my mother’s womb. I praise you because I am fearfully and wonderfully made; your works are wonderful. I know that full well…all of the days ordained for me were written in your book before one of them came to be. How precious to me are your thoughts, O God!” {Psalms 139:13-14, 16-17}
God created me. He made me who I am and the way that I am for a reason. He placed me in those situations and circumstances for a reason. They made me who I am. And despite the pain or the hurt that they may have caused me, I am grateful for them because they made me, ME. It just doesn’t matter. All I can do is live the life that I was called to live, in the way that I was called to live and know that that is enough. That’s all that I can do. That’s all that I need to do. That’s all that I want to do.
So, maybe I am the “black sheep”…maybe hubby is to. Maybe we will both always be on the back burner. Maybe we will always bring up the rear and be the sidekicks. But that’s okay. Because I am not the only one to feel as if I’m an outsider. There was another. He too was an outsider. And outcast. One who felt “distant.” And he understands. He gets it. Who is he? 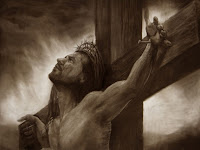 They call him Jesus.
And he too was a “black sheep.”

Because if I’m the club with him, being that sheep, really is okay.