Since Noah is sleeping (finally…something he did very little of last night) I decided to take a few minutes to type a very much needed update. I’ve definately got to try to find more time to keep things up to date on here. I’m slacking. But, I guess that’s the territory that comes with “Mommy-hood.” Haha… Let’s see where to start….

I guess I’ll start with the most exciting news first. Josh found out yesterday that he was going on the HS (Health Services Technician) A-School list this week. Which is exactly what he wanted, but wasn’t sure he was going to get to do. The wait for HS A-School is about 2 years, but with his ASVAB score and the fact that he was in the Navy and has prior service time, he will get to move up the list quicker and jump some of the people who already on there. We are really excited because this is going to be the ticket he needs to get his career rolling. Since he wants to ultimately be a Surgical Physician’s Assistant, no better Coast Guard Rate would be better, because that’s basically what an HS is.

He is so happy…he was like a little kid in a candy store yesterday when he got home. He put on his old scrub cap and walked around the house talking about finally getting the opportunity to do what he loves. I’ll admit that even though I am excited for him, and ridiculously happy that things are going like we both hoped they would, I’m not to keen on the idea of him being gone. A-School is 3 1/2 months…in Petaluma, California. But, we talked about it, and moving with him wouldn’t economically make sense, especially since he has to come back to Florida after school to check out, and the Coast Guard will only pay to move us from Florida to our new Duty Station. (Yep, that means we will be relocating…YAY!) So we are going to start saving the first of the year that way Noah and I can take a few trips to CA to visit during that time. It’s going to be tough…especially since I’m not found of being away from my husband for that long. But, like Josh said, if it were easy, everyone would do it.

I can not get over how fast Noah is growing! I know everyone has always said that they “grow up too quick”, but it’s hard to believe that he’ll be 2 months old on December 27 already. He is doing really good. We are still having some trouble with his Acid Reflux and his tummy, but he’s getting better pretty fast. The pediatrician said by 3 months he will have pretty much outgrown that. He can hold his head up by himself now…occasionally he is still a little wobbly, but not usually. He doesn’t really have to be burped anymore…he can do that on his own too. And he’s starting to hold his own bottle when we feed him. Feeding…lol….this child definately has his daddy’s appetite. Just a few minutes ago he sucked down 5 1/2 ounces of Similac in about 15 minutes; and probably would have kept eating if I would have given him another bottle. But, he is a growing boy, so I guess he needs all the nutrition he can get. He hasn’t been to the doctor since November 24, and he was 8lbs 10.5 oz then…I guarantee that he weighs atleast 9.5 or 10 lbs now.

And he is so much fun. He’s started “talking” (baby gibberish of course) some, and that is so cute. He sits in his bouncy seat or lays on the bed or couch and looks all over the place talking and laughing. Josh and I think that babies see angels. The way he looks at stuff and is so at peace, that’s the only explanation I can come up with. He’ll stare and smile and laugh and cackle at absolutely nothing (well, what we think is nothing) but a part of me seriously believes that he sees something that we can’t. Maybe it’s because babies and children are so innocent that they are pure enough to see things that adults don’t. He still isn’t sleeping the best in the world. Even if he doesn’t nap much during the day, something about night time makes him want to sit up and play. He likes to lay with his daddy and watch TV. He is most certainly a daddy’s boy…though he is kind of partial to his mama during the day time. But when Daddy gets home from work, it’s all about him. 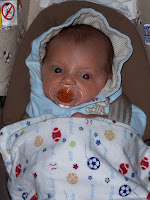 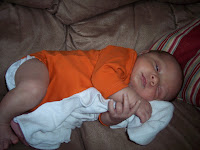 I FINALLY got my Blackberry fixed yesterday. It seems simple, but I was extremely excited about it. It’s been acting stupid for about a month and half…deleting all of my text messages and emails, my call history, not showing voicemails until 2 or 3 days AFTER they were sent…just crazy stuff. I had to take the battery out and reset it 3 or 4 times a day. I took Monday and was just going to trade it in for a completely different phone because they kept saying there was nothing wrong with it. I asked them what the trade in value on it was…$40.00. Yea right! I paid $300.00 for that stupid phone less than 6 month ago, and you only want to trade it for $40 measly bucks? Did you fall completely off of your rocker and hit your head? I don’t think so. Their excuse was that since they are coming out with the new Blackberry Storm that mine won’t be worth as much money anymore. But they are still selling these things everyday for $499.99. I took it to a different store for them to look at it and they ran one of those diagnostic tests on it and told me that yes, it was messed up and they gave me a brand new one for nothing. So, yea, that made me really happy. I’m quite fond of my Blackberry and didn’t really want to have to trade it in.

We finally got our Christmas tree put up about 2 weeks ago. Josh didn’t really want to decorate for Christmas since we are leaving tomorrow to go home for 2 weeks. But I love Christmas decorating…and Christmas isn’t Christmas to me without a tree. (Yea, I know that’s not what Christmas is about, but I still ike the festivities) And I have Christmas dishes that my grandmother gave me, so I set them out on red table clothes on the kitchen table. Not much, but enough to give the house a “Christmasey” kind of feel. 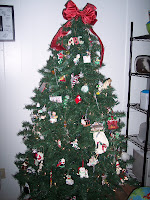 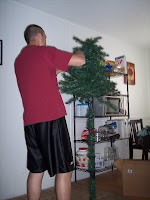 I guess personally the most exciting update for me is the fact that I’m back where my size 7 jeans. Less than 2 months after having a baby, I’m a mere 8 lbs from my pre-pregnancy weight. I still have LOTS of toning up to do (atleast in my eyes) but I can wear all of my pre-Noah clothes again. I was going to start at the gym after I got my 6 week checkup out of the way and the doctor cleared me for physical activity again, but since Christmas is next week and the Good Lord knows how much I enjoy holiday food, I decided I better just hold off until after Christmas is over. Josh and I have a joint gym membership and so does his buddy Chris. So the 3 of us and my friend Ashley are all going to start working out together the first of the year. Plus, our Young Adults Ministry is starting a co-ed softball team, so I will definately be playing on it. Not to mention, Josh and I walk 4 miles around the park a few times a week, Ashley and I play tennis, and carrying Noah in his carseat is a workout all on its own. I’m excited about getting back in shape. I never thought I would say that, but I’m actually looking forward to hitting the gym every afternoon. I think I’m going to take a pilates class too…I’ve always wanted to try that.

Josh and I are both starting back to school in August. We both have to re-take our ACT, so we’re going to hit the books hard together. I’m going to re-enroll as a Freshman even though I have almost 2 years of credit. Most of my classes probably won’t transfer cause I’ve been out of class a few years, not to mention if I make higher on my ACT than I did last time (which, I enrolled in Troy with a 26, so I know I can make atleast that if I put in more study time) I may be able to get a scholarship. But even if I don’t, Josh’s GI Bill will pay for my education. Still no clue what I’m going to do…so those of you that read this, I prayer that God would help me figure it out would be much appreciated.

Well, I guess that’s all of the updates I can think of for now. I promise I’m going to try to do better on keeping things posted. I’m still a newby to this parenthood thing, so give me some more time to adjust. Right now, I have to go mix Noah some more formula, drag the suitcases out from the closet, sort the laundry and start packing. Not to mention I really want to clean the house from top to bottom before we leave tomorrow. We are heading to Alabama for 10 days tomorrow around 1:30. I am really excited. I haven’t seen any of my friends since August, and most of our families haven’t even seen Noah yet. Aside from our parents and brother and sister, no one has actually seen the baby. I can’t wait to show him off to everyone. 🙂 I’m without a doubt a very proud mommy…and you don’t have any clue how proud his daddy is. Anyways, hope everyone has a very Merry Christmas!

« The Everyday Man’s Problem With the Christian Faith