Ok, I’ve finally gotten around to adding pictures from this past weekend. I promise I will be posting my 1st recipe tomorrow. (I’m cooking it tonight, so I can take a picture to post with it.) Anywho…we spent our 4th at the pool. We were going to go to the beach, but I knew it would be a hassle trying to find somewhere to park and all of that. And since we have a really nice pool with lots of room, we decided that would be so much more convenient for us. Noah loves the pool anyway. Not to sure how he would take to the salt water and the waves. He fell asleep (actually, he more or less passed out) after the pool, so we shot fireworks with our neighbors instead of waking him up and going down to the beach. It was alot of fun.
Thursday we took Noah to his first MLB game. The Rays were playing the Blue Jays and the Coast Guard got Josh’s unit tickets for their morale day. Noah had a great time. He was fascinated by the lights and the bells and the clapping. I was afraid he was going to flip out over all of the noise, but somehow or another, he even managed to take a nap. I swear that child could sleep through a tornado. 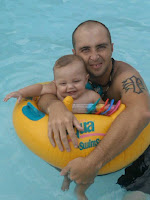 With Daddy in the pool… 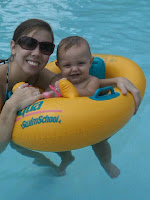 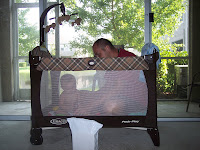 Josh climbed in Noah’s playpen with him…for what reason I don’t really know.
But it was too cute NOT to take a picture. 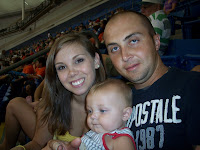 The three of us…Noah was occupied by the game. 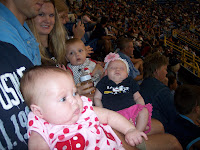 Noah (with a bottle of course), Heidi, and Nevaeh.
The 3 babies of the Unit. 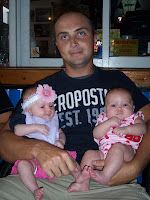 My husband- the “ladies” man 🙂
He won’t admit it yet, but I think he’s getting ready for baby #2 already…Yikes. 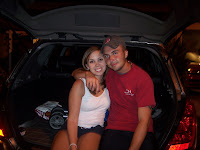