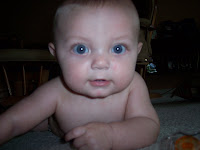 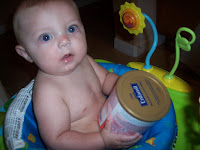 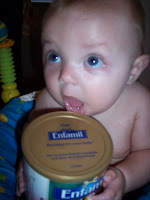 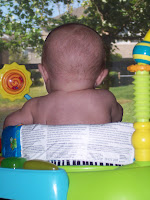 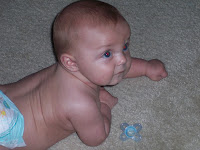 I’ve been meaning to add some new pictures, but Josh and I have been celebrating our Anniversary for the past few days, so I haven’t really had a chance. The Big Boy is growing like a weed! I can’t believe he will be 6 months old next week. Time flies. And Josh and I have already been married a year…that’s one of those things, sometimes it seems like we have been married alot longer (Being parents already adds to that) and sometimes it doesn’t feel like it has been very long at all. We met my mom and my sister in Lake City on Friday with Noah and they are keeping him in Alabama/Georgia this week. Josh’s mom got him yesterday and took him to have pictures made. I am so excited to see them! And it’s been nice to get a break for a few days.

Josh and I mainly spent the weekend relaxing. I told him that was all that I wanted for my anniversary…just the opportunity to relax and spend some time alone (something we never seem to get to do). We went out to eat on Friday night when we got home from Lake City. Saturday we got to sleep late. I don’t think we got up until 11:00. It was fabulous! We went to the mall and Josh patiently walked around with my while I looked for a dress to wear Saturday night. Saturday night he took me down to Clearwater Beach, we walked down the beach to watch the Sunset, went out to eat and just sat and talked. After we got finished eating we went and walked down the beach again.
Sunday morning, Josh woke up early and left to go get me a gift. He came back and had bought me a dozen Red Roses and some Orange Carnations (the closest thing to the actual Orange Blossoms that you are supposed to get on your first anniversary…they aren’t in bloom right now.) He got me a beautiful picture to hang in our living room, a book on how to Maximize your time (something he knows I desperately need to do), and a notebook with my favorite ink pens. That doesn’t sound like much to everyone, but to an aspiring novelist like me, it was the sweetest gesture. He knows that I fill up notebooks right and left and never seem to have enough paper to put all of my ideas down. Then we spent the rest of the day at the pool.
My mom got us the “Anniversary” Willow Tree figurine, 2 journals, and “The Love Dare”…plus she burned me a copy of “Twilight”. We had so much fun. And the baby is in Alabama until Friday, so we have the rest of the week just the two of us. I’m planning on getting a ton of writing done this week. Catching up my blog was just phase one. Had to brag about how wonderful my husband is and how great my anniversary was.
The pictures of the baby are from Easter. The 2 with the Enfamil can are my favorite. That’s part of what the Easter Bunny brought him. He got some new clothes and a few new toys too, but I think the Enfamil was his favorite. We are waiting on him to start crawling, but nothing yet. He can barrel-roll like you wouldn’t believe. Just still learning how to get himself situated to actually crawl. Anyways, got a few new blog ideas, just got to post them. Hope everyone has a great Monday!

« A Test of Faith